We are concerned California might be approaching another dry season despite experiencing a hint of healthy, wet weather over the past three months. Although spring just arrived, the weather can’t seem to make up its mind as to which season it is. In the first week of February, many cities hit record high temperatures. The small Riverside County town of Thermal even reached 93 degrees! However, by the third week of the month, drastic below-freezing temperatures started making an appearance at night. According to Bella Viva Orchards’ owner, Victor Martino, this recent freeze is the worst he has ever experienced in the month of March during bloom season when fruitlets and nutlets can be damaged by frost. To top it off, February wrapped up by leaving a major statement and immensely rare occurrence that happens maybe only once every 10 years or so; there was a huge hail storm in the Central Valley and snow throughout the Bay Area.

Is the Snowpack Back?

Despite heavy rainfall from recent storms, the water levels still aren’t back to normal. It hasn’t even been a year since California lifted its drought state of emergency, leaving little time for recuperation from the five-year drought that devastated the state and created much havoc throughout agricultural land. The snowpack of the Sierra Nevada Mountain Range accounts for a third of California’s water used by cities and farms throughout the year. Snowpack is vital for crops as it slowly releases water during the rising temperatures of the spring and summer months. This snow runoff helps keep the ground moist and provides ideal conditions for crops to thrive. Even after the last storm in the second week of March, the snowpack currently stands at only 40 percent its average (01). That is a significant difference compared to the 173 percent standing average the previous year (02). According to the United States Drought Monitor, the estimated population currently affected in California by the drought is over 24 million (close to 62 percent) and it doesn’t look like it’s going to improve any time soon (03). This time last year, 23 percent of our state was in drought conditions; in contrast, this year we are already at close to 90 percent (04)!

All of us, including farmers, laborers, crops and consumers continue to be affected by the drought. In 2016 alone, the drought cost California farmers over $600 million dollars of a $45.3 billion-dollar output (05)(06). Over the course of the five-year drought, thousands of agriculture jobs were lost. 2015 might have been the worst year overall, as surface water was down by 48 percent. To this day, millions of acres remain fallow or abandoned. This is partially because water became so scarce that many state and local regulations were put in place to limit water use in an attempt to maintain reserves. Here at BVO, we found ourselves uprooting healthy trees because there wasn’t enough water to keep them all alive and healthy. We’re finally starting to make a comeback by replanting but are still concerned we may be headed toward another drought. 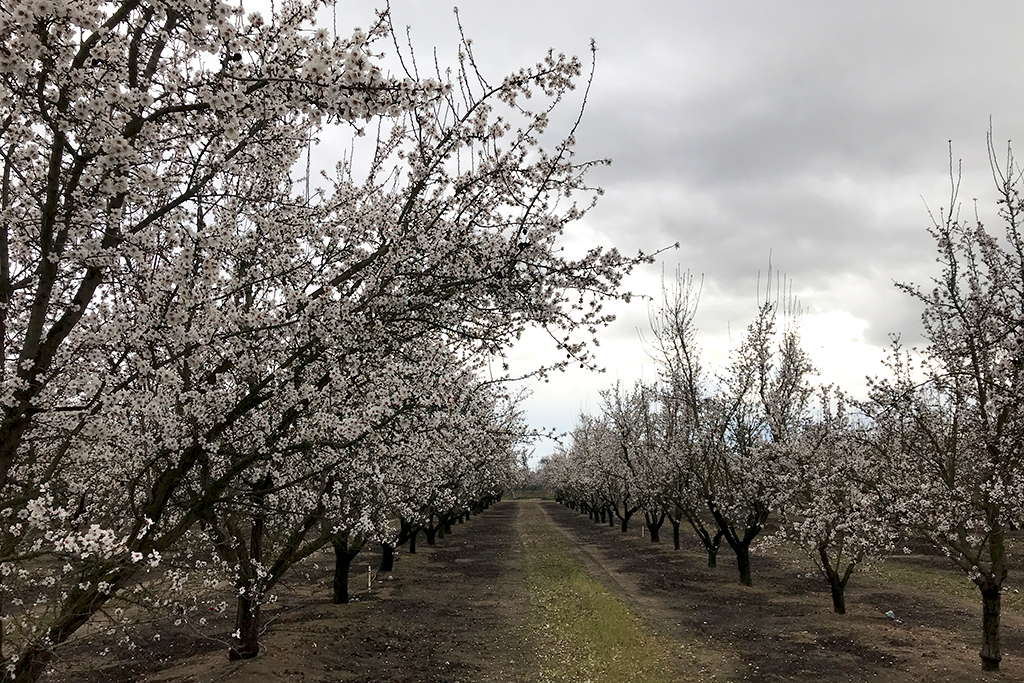 The Weather and your Food

The unusual, dry weather this year is causing many Central Valley crops, including almonds and apricots, to blossom ahead of their habitual itinerary. Yet the freezing temperatures, rain storms and high winds put distress on these delicate blossoms, which in turn, is harming the overall harvest. In fact, the frost which brought temperatures down to the low-20s at the end of February, was devastating to the almond crop and resulted in the loss of at least 20 percent of California’s entire crop (07)(08). We contacted our organic almond farmer, Henry Colombo, to follow-up and see how his orchards are holding up through all the extreme weather. “It’s been depending on the variety and whether or not they’re early varieties or late varieties,” he said. “So far there’s been more damage on my early varieties this year than my late because they bloomed before the freeze. The ground was dried out, so the trees didn’t absorb heat during the days like they would if it was damp. Then the freezing temperatures would hit, resulting in the damage. Some blossoms fall every year due to the nature of things, but this year there are tons on the ground.”

He says he’ll know more in the next couple weeks as to how much his crop has been affected and is hoping for the best but preparing for the worst. Aside from almonds, there could be a shortage of many other crops which may lead to price increases and decreased availability for you, the consumer. Altogether it looks like 2018 is going to be a difficult water year to predict. Rain and snow are in the forecast for some of this week, but we are bracing ourselves for what could likely be another drought year in the making.

Just like many of the products Bella Viva carries, Sarah was homegrown right here in California’s Central Valley. She’s passionate in all she does and loves to keep herself busy. She’s a mom to two Boston Terrier siblings, is super close to her family, enjoys taking photos, anything to do with music, the outdoors and cooking. Her favorite colors are green and purple, favorite animals are dogs and penguins, favorite season is Autumn, and favorite Bella Viva dried fruits at the current time are the organic mango and organic pineapple. Sarah’s written for many publications and organizations and is honored to be part of the Bella Viva team!